Why save the forests?

Why save the forests?

When I was a baby my parents used to put me to sleep in my pram and in fine weather would place it underneath a big cypress in my grandparents’ garden. Later they would come back to find me wide awake, probably having been so for a long time, not crying but quietly and contentedly contemplating the tree above. Perhaps as result of this early experience for as long as I can remember I have always had a great affection for trees. As a child looking up through the latticed branches of a spreading beech or oak I would feel sheltered from the vertigo-inducing blue sky and scudding clouds above. It just so happens that this “feeling” is absolutely correct – trees do shelter and protect us in many, many ways.

Next time you are walking though a mature deciduous forest on a windy day, try stepping off the path into the undergrowth and within a few metres all becomes much stiller. This is not just a small-scale phenomenon as forests produce this “calming” and moderating effect at a landscape level as well. As we probably all know from our school days, trees produce much of the oxygen that we breathe and in dusty, polluted cities filter out much of the dust and pollutants that our vehicles generate. Trees also store carbon and create rain as bioparticles released from the leaves in boreal and tropical forests form nuclei around which moisture in the air condenses to form raindrops so buffering and moderating our climate. Consequently, forest clearance poses risks far beyond the region it occurs to impact on agriculture and the speed of climate change.

A mature tree has thousands of kilometres of roots which prevent erosion and regulate waterflow through the soil, purifying it in our watersheds, releasing it steadily in times of drought and holding it back in times of flood. For example, forested land can retain up to 60 times more water than the equivalent area of grassland.

Why are forests so important?

The International Day of Forests is held annually to raise awareness of the importance of all types of forests and trees outside forests. Today forests cover one third of the Earth’s land mass, down from an estimated fifty percent, but still performing vital functions for the planet. Forests are the most biologically-diverse ecosystems on land, home to more than 80% of the terrestrial species of animals, plants and insects and as such are a home for countless species of wildlife and trillions of individual organisms. They also provide food, fuel, medicine, shelter, jobs and security for forest-dependent communities which total more than 1.6 billion people and more than 2,000 indigenous cultures. They play a key role in our battle in adapting to and mitigating climate change. Forests contribute to the planetary balance of oxygen, carbon dioxide and humidity in the atmosphere and protect watersheds which supply 75% of freshwater worldwide. 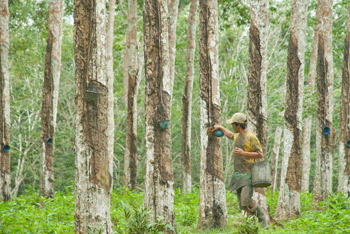 Yet despite all of these priceless ecological, economic, social and health benefits, global deforestation continues at an alarming rate – 13 million hectares of forest are destroyed annually. Deforestation accounts for from 12 to 20 percent of the global greenhouse gas emissions that contribute to climate change.

The International Day provides a platform to communicate the vital role forests play in poverty eradication, environmental sustainability and food security. Sustainable management of all types of forests are at the heart of unlocking challenges of conflict-affected, developing and developed countries, for the benefit of current and future generations. The Day’s theme for 2015 was “Create a Climate Smart Future” to highlight the ways in which forests and climate change are linked and the central role that forests can play in its mitigation. 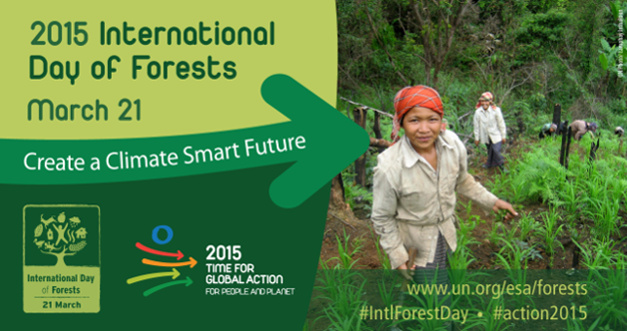 Some good news to combat doom and gloom on the day itself were the commitments made by more Latin American, Southeast Asian and African countries to restore degraded forest which increases the area which has been contributed to the Bonn Challenge to a total of 61.9 million hectares. The Bonn Challenge is a global movement to restore 150 million hectares of degraded and deforested land by 2020.

What can you do?

See and share the video and spread the message to help raise awareness. Find out more about the International Day of Forests, view the inspiring short films or read more about the importance of forests to our economies and societies.

Why not plant some trees yourself in your garden or community – native trees are best for biodiversity, for example, oak and birch will support the most species of animals (over 300 species of insect and many birds, fungi and lichen). If you have less space a smaller tree like a hawthorn or willow will give support to many species while fruit- and nut-bearing trees are also valuable for wildlife (for native trees and heritage varieties see Irish Seed Savers  and Future Forests. It’s currently the wrong time of year but come autumn you could try collecting seeds and growing trees from these – see how here. Get out and about in a wood near you which you can find at Coillte Outdoors with different categories of difficulty of walks.

There are many woodland and rainforest charities working to protect and create native forest. In Ireland, a number of charities promote planting of native woodland including Crann, the Tree Council of Ireland and the Native Woodland Trust and Just Forests which campaigns against illegal deforestation. In the UK, the Woodland Trust campaigns to preserve and expand native woodland while Trees for Life in Scotland aims to restore the Caledonian Forest. If you’re interested in protecting the “Earth’s lungs” there are many rainforest charities including our preferred environmental charity the World Land Trust (which BioLogic uses for its carbon offsets) that purchases threatened rainforest in biodiversity “hotspots” of the world. You can keep it low key by just planting a tree or upscale to be more ambitious by buying an acre of rainforest.

Are you eating the rainforest?

Lastly, when you buy food and wood products you may unwittingly be contributing to tropical deforestation. To avoid this, when you purchase wood products make sure you look for the Forest Stewardship Council logo and for tropical products like coffee or cocoa look for the Rainforest Alliance frog symbol (see below). You might never have heard of it but palm oil is an ingredient in hundreds of supermarket goods, try looking and you’ll be amazed at how many unsuspected products you’ll find it in, from bread and chocolate bars to party foods and skin-care products (and increasingly in biodiesel) so to avoid this you need to check the ingredient list. Palm oil has been and still is a major driver of deforestation in South-East Asia and is now expanding to Africa and Latin America. For an excellent interactive story of palm oil click here and for a humorous (if slightly gory) take on the impacts of palm oil which has led one company to clean up its act click here (spoiler: it’s safe to eat your Kit Kat now). For another campaign where the company still has to take the right step and you can indicate your support for this click here.

Every little helps so to do your bit look for palm oil-free products (e.g. made with rape or sunflower oil), RSPO-labelled products (Roundtable on Sustainable Palm Oil), or the best products listed by the guide at this link. Luckily, palm oil just got much easier to identify thanks to new EU Labeling Regulation 1169/2011 on the provision of Food Information to Customers (FIC Regulation) which requires all products containing palm oil to be labeled as such. Previously, manufacturers could conceal the presence of palm oil in their ingredients under the generic term ‘vegetable oil’. This law came into effect on 13 December 2014. Now it’s up to us as consumers to take advantage of it. Will you be making use of it?

Did you find this article interesting? Then, just share it to spread the message to help raise awareness.

About the Author: Douglas McMillan