BioLogiQ’s Learning Centre is being developed as a portal of online resources to inspire and educate people to connect with and become stewards of the amazing natural world around us. To do this we encourage children and adults of all ages to undertake positive environmental activities against habitat destruction and pollution and for biodiversity by means of positive, educational experiences in and about the environment.

Positive environmental activities feed into greater sustainability awareness, that is how we can “meet the needs of the present without compromising the ability of future generations to meet their own needs”.

Unlike other animals as humans we have the power to create or destroy our environment. Our Earth is the source of everything we need for a healthy productive life but what we do determines whether we are regenerating our planet home or degrading it. Actions at all levels matter, from what we do in out own backyards to the products we consume to the policies we support. Taking positive actions is the best way to counter despair and move towards a brighter better future with an abundance of resources for everybody.

How can you reduce your carbon footprint?

There are many many ways to reduce your carbon footprint. Information from calculating your carbon footprint highlights the appropriate changes that will help reduce it. Broadly speaking organisational strategies should follow the energy management hierarchy as illustrated below with efficiency (prevent wastage /reduce energy use) at the top followed by installation of onsite renewable energy then support offsite renewable energy projects and lastly, buying carbon offsets. 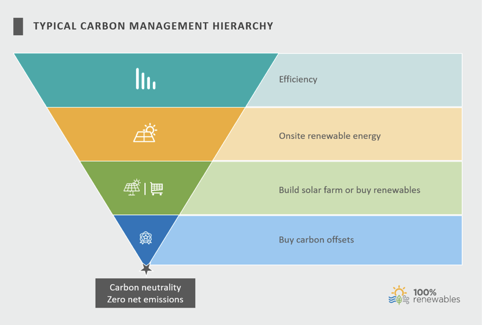 As individuals, there are as many ways to reduce this as there are days in the year but broadly speaking these can be grouped into three areas:
Making lifestyle changes
Reducing home energy use
Offsetting Carbon Emissions
How do you become carbon neutral?Grainne Whittle2020-12-15T12:12:52+00:00

How do you become carbon neutral?

Carbon neutrality means having a balance between emitting carbon and absorbing carbon from the atmosphere in carbon sinks. Removing carbon oxide from the atmosphere and then storing it is known as carbon sequestration. In order to achieve net zero emissions, all worldwide greenhouse gas emissions will have to be counterbalanced by carbon sequestration.
A carbon sink is any system that absorbs more carbon than it emits. The main natural carbon sinks are soil, forests and oceans. Natural sinks are estimated to remove between 9.5 and 11 Gt of CO2 per year but annual global CO2 emissions reached 38.0 Gt in 2019.
We need to change the way we do business and how we live our lives. The first step to becoming carbon neutral is to calculate your carbon footprint with an online calculator. Find out how much carbon you’re using by entering information about your home’s.
What are the different types of bogs?Grainne Whittle2020-12-15T12:01:05+00:00

What are the different types of bogs?

A bog or bogland is a wetland of soft, spongy ground that accumulates peat, a deposit of dead plant material—often mosses, and in a majority of cases, sphagnum moss. Broadly speaking there are raised bogs and blanket bogs.
Raised bogs are discreet, raised, dome-shaped masses of peat occupying former lakes or shallow depressions in the landscape. Their principal supply of water and nutrients is from rainfall and the substrate is acid peat soil, which can be up to twelve (12) metres deep. Raised bogs are characterised by low-growing, open vegetation dominated by mosses, sedges and heathers, all of which are adapted to waterlogged, acidic and exposed conditions.
Blanket bogs give the Irish landscape its unique appearance. We have two types of blanket bogs – Atlantic Blanket Bog and Mountain Blanket Bog. Atlantic blanket bogs cover the landscape of the west coast from sea level to an altitude of 200m. Here, rainfall is 1,200mm per year and the acid peat substrate ranges from 2 to 7m deep. Atlantic blanket bog vegetation has a characteristic grassy appearance due to the occurrence of purple moor grass (Molinia caerulea) and black bog rush (Schoenus nigricans). Patterned surfaces of pools, flat and sloped areas, flushes and swallow holes are important features of blanket bogs.
Mountain blanket bogs occur on relatively flat terrain in the mountain ranges above 200m altitude. Here rainfall is high and evaporation is low. Mountain blanket bogs are rain fed and their peat is acidic. The vegetation is characterised by the presence of ericoid shrubs and in particular ling heather (Calluna vulgaris), crowberry (Empetrum nigrum) and bilberry (Vaccinium myrtillus). Natural drains, lakes and flushes are features of mountain blanket bogs.
What is biodiversity and why it is important?Grainne Whittle2020-12-15T11:59:27+00:00

What is biodiversity and why it is important?

Biodiversity, which is short for ‘biological diversity’, is all of the amazing variety of life on Earth, in all its forms and all its interactions. It encompasses diversity on many levels; the vast number of species of plants and animals, the genetic diversity within and between these species and the different biomes and ecosystems of which they are part, including forest, bog, tundra and desert. Biodiversity also includes the diversity within microscopic organisms, including bacteria, viruses and fungi.Biodiversity supports everything in nature that we need to survive: food, clean water, medicine, and shelter.
While Earth’s biodiversity is so rich that many millions of species have yet to be discovered, many species are being threatened with extinction due to human activities, putting the Earth’s magnificent biodiversity at risk. We are currently moving towards a sixth mass extinction event, with the same result as the famous asteroid explosion that took out the dinosaurs, with species disappearing about 1,000 times faster than normal rates of extinction. The number of animals living on the Earth has plunged by half since 1970. The number of tigers has plunged by 97% in the last century.
Without biodiversity, there is no future for humanity. If you live in a town or city then you might think that wildlife is just something you watch on television. However, the reality is that the air you breathe, the water you drink, the food you eat and almost all the resources you consume are produced by biodiversity. The vast interconnected network of all the Earth’s life forms generates the ecosystem services that provide these resources. Some examples are obvious: without plants and phytoplankton there would be no oxygen and without bees to pollinate there would be no fruit, nuts or seeds. Others are less obvious – bogs, forests and marshes absorb excess rainfall reducing flooding and purifying water while coral reefs and mangrove swamps provide nurseries for most commercial fish species and invaluable protection from cyclones and tsunamis for those living on coasts. In urban areas, trees absorb pollutants and help purify the air while it has also been proven that together with green spaces they improve mental health.
How does carbon offsetting work?Grainne Whittle2020-12-15T11:57:32+00:00

How does carbon offsetting work?

Carbon offsets are a form of trade. When you buy an offset, you fund projects that reduce greenhouse gas (GHG) emissions. The projects might restore or protect forests or bogs, update power plants and factories or increase the energy efficiency of buildings and transportation. It should be the choice of last resort, after you have reduced your energy consumption by preventing waste or efficiency measures and installing or supporting renewable energy. It can be used to address the unavoidable emissions that still occur when you have implemented these measures. As GHG emissions mix quickly with the air and spread throughout the entirety of the Earth’s atmosphere so GHG reductions anywhere result in fewer emissions entering our atmosphere.
Carbon offsetting is a way of compensating for these emissions by funding projects that have a positive environmental impact elsewhere to ‘repair’ damage done. The carbon offset market is divided into two main categories: offsetting for compliance reasons and voluntary carbon offsets.
The voluntary carbon market is for those that choose to offset their emissions for personal reasons, rather than following legal prescribed protocols. Consequently, the voluntary carbon market is unregulated and a number of different standards and verifications have been created to ensure that offsets purchased go to do what they should with greater or lesser degrees of success.
This voluntary market is mostly made up of private individuals, small businesses, educational institutions and non-governmental organisations that want to make a difference to their own environmental impact and carbon footprint. Certificates are issued for a number of carbon credits, which account for the CO2 that is being offset.
Contact BioLogiQ

For more information on how we can save you money, call us on 087 9678 372 or email info@biologiq.ie.
Contact BioLogiQ
This website uses cookies and third party services. Read more. Ok
Go to Top